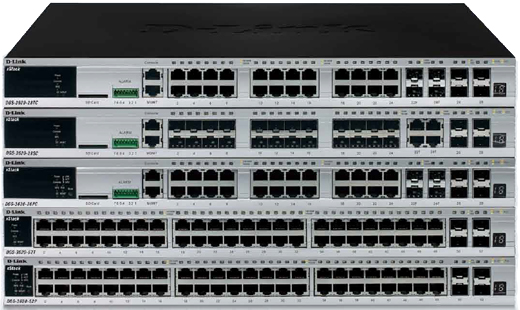 Sorry, this product is no longer available, please contact us for a replacement.

Accessories are still available below

The xStack DGS-3620 Series is equipped with robust features that fulfi ll the most demanding network’s needs for voice and video streaming. Stackable up to 12 units under a single IP, the switches are able to provide a total of up to 576Gbps aggregated bandwidth fixed-in. To help secure your network, the D-Link Safeguard Engine™ helps prevent Denial-of-Service (DoS) attacks while the Access Control List (ACL) enhances network security. The DGS-3620 Series is equipped with industry standard management features including easy-to-use CLI and webbased administrator interfaces. D-Link provides these features on a scalable platform, increasing your company’s productivity while protecting your investment. domain and uses optional 10-Gigabit uplinks to move intra-stack traffic at 20 Gbps full duplex speeds.

The xStack DGS-3620 Series provides current IPv4 networks with a simple migration path to IPv6 and protects your investment for future network upgrades when greater security and larger addressing are required. Basic static routing such as RIP and RIPv2 are supported for small network routing applications. Advanced routing protocols such as OSPF and equal cost routing are supported for load balancing and building a scalable network.

Stackable Up to 12 Units

Each switch in the xStack DGS-3620 Series has four optional SFP+ Ports to install compatible modules for stacking provide up to 40Gbps data stacking backplane while in full-duplex mode. This enhances your overall network performance for switches transmitting large fi les such as graphics or pictures. Under stacking mode, the switches are hot-swappable. This means that in a stack confi guration, any of the switches can be replaced or removed without affecting the network. There is no need to reconfigure a replacement switch; just give the new switch the same stack number ID as the old switch and the network will carry the same confi guration as before. This minimizes network downtime and maximizes the productivity of your business. Also, to facilitate network administration, cross stack port mirroring and port trunking are supported

The D-Link Safeguard Engine and Security

The DGS-3620 Series incorporates advanced mechanisms to detect an attack against the central processing unit of the switch and to take corrective action on the attacking interface. When a DoS attack is waged against any of the DGS-3620 switches, the D-Link Safeguard Engine detects the threat and prevents overload of the CPU, thus ensuring network integrity and helping to maintain open network bandwidth channels.

In addition, the xStack DGS-3620 Series offers a variety of authentication methods, including those without the requirement of a RADIUS server. It supports MAC-based Access Control, which authenticates the user based on the MAC address of the client so that authentication is transparent to the client. It also supports Web-based Access Control, which prompts for username and password before allowing access to TCP traffic. Lastly, the xStack Series supports Network Access Protection (NAP). This feature works in conjunction with Microsoft® software platforms such as Windows Vista® to reinforce network health and security policies including policy validation, network restriction, remediation, and ongoing compliance.

For today’s businesses, having voice, data, and video on the same network is common practice. This challenge is met by the xStack DGS-3620 Series, which support 802.1p with eight queues. The administrator can designate traffic priority based on a variety of means including IP and MAC address, so that voice data is clear and jitter-free. Video traffic can also be assigned with the same priority. In addition, the xStack DGS-3620 Series provides IGMP Snooping, which allows the forwarding of multicast packets such as streaming audio and video without increasing network broadcast congestion. By snooping IGMP registration information within a frame, a list of workstations that have joined the multicast group is created. This list then allows the switch to intelligently forward packets to only the appropriate member workstations. For IPv6 traffic, the xStack DGS- 3600 Series supports MLD snooping. Multicast routing is supported under independent multicast protocol, including PIM-SM, PIM-DM, and PIM-SDM (Sparse Dense Mode). DVMRP is also supported to interconnect two multicastenabled networks across non-multicast networks. In conjunction with support for 802.1Q VLANs, Quality of Service (QoS) and security can be achieved on a network infused with data traffic.

The xStack DGS-3620 Series supports SNMP v1/2c/3 sotraps can be set on abnormal events and information can be polled to maximize network productivity. Other standard management features also supported include RMON and IEEE 802.1D Spanning Tree. User interfaces include an intuitive Webbased GUI or standard CLI,either of which can be protected through SSL or SSH encryption.